This site visit was made possible by the National Marine Sanctuary of AS and the Dept. of Marine and Wildlife Resources.
Site Visit Title
Leone Coral Nursery and Fagatele Bay

Site Visit Description
In 2012, the Leone Village Council held a series of meeting with local agencies to recognize the importance of mangroves and coral reefs and formulate a management plan that aims to preserve coastal ecosystems. In 2014, the village took part in designing and implementing a coral nursery project within Leone Bay. The model used for planting coral fragments in the reef is referred to as “Fale Samoa”, due to its unique shape resembling a Samoan guest house. Come see more than fifty of these models placed throughout the reef flat. This site visit includes transportation to the village of Leone where you will have the opportunity to snorkel in Leone Bay.
​
For the full day trip on the 11th, you will also have the chance to snorkel Fagatele Bay of the only National Marine Sanctuary south of the equator!

It was back in 1986 that the Fagatele Bay National Marine Sanctuary was designated to protect its extensive coral reef ecosystem. Fagatele Bay, now part of the expanded National Marine Sanctuary of American Samoa, can be accessed by land and is only a short drive from Pago Pago to the gate at a private residence in Futiga Village. Hikers will pass through the metal gate at the family house at the trail-head and begin walking up a slight slope to the grassy trail atop the ridge that separates Fagatele Bay from another sanctuary area, Fagalua/Fogāmaˊa. The view is incredible and brings most to pause and take it in. Not far up the trail is the entrance to the forest where you’ll switchback down the earthen trail to find wooden stairs that lead to a small sandy beach that can be enjoyed at lower tides. Surveys have identified at least 200 species of corals in the bay that are thought to be the centerpiece of a community of more than 1,400 species of algae and invertebrates and more than 270 species of fish. Abundant groups include adult and juvenile damselfish, surgeonfish, wrasse, butterflyfish, and parrotfish. While exploring the bay you may encounter a curious blacktip reef shark, endangered hawksbill and green sea turtles or spotted eagle rays gliding by. Pacific bottlenose and spinner dolphins are known to visit Fagatele Bay. During September and October, the peak months of whale season, you may enjoy humpback whales singing during a search for giant clams. 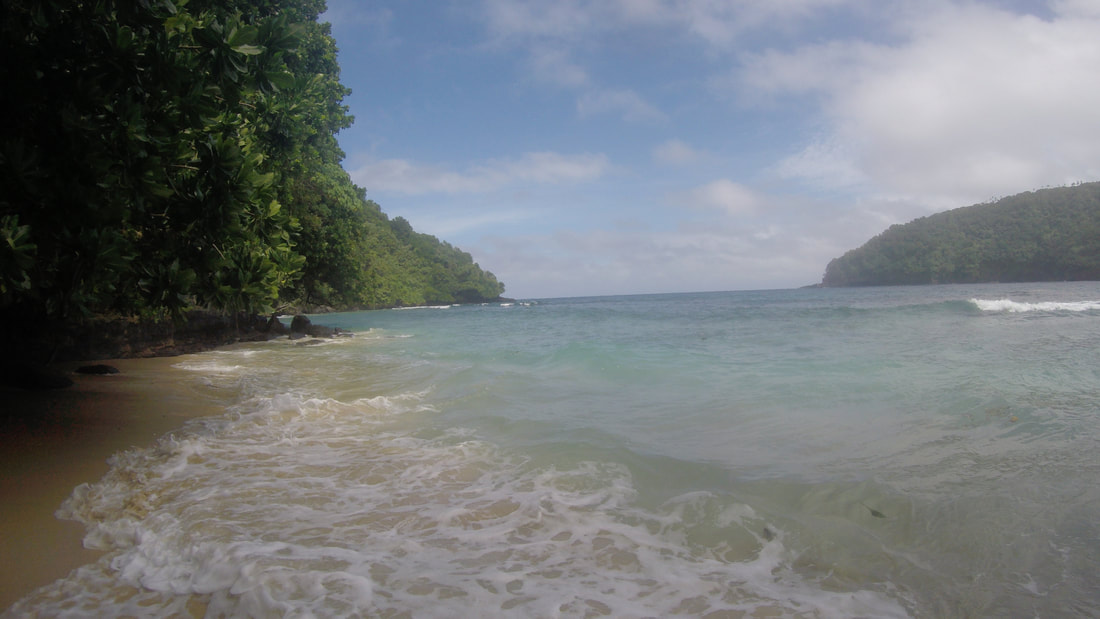